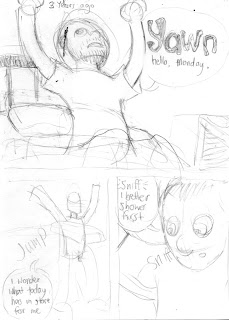 The Target 144 Challenge is to make a comic or zine from start to finish in 144 hours. It's an interesting twist on the time-limited comic/zine creation challenge, having six days rather than the traditional 24 hours certainly raises the bar in terms of the quality expected.

I arrived at sticky institute just after 12pm to start work only to find several zine-sters already hard at work on their new zines. I was reading Scott Pilgrim vol. 5 on the tram into the city, and it's zanyness really seeped into the first couple of pages of the comic. The other influence to my comic at this stage is Paul Hornschemeier, and in particular, his book The Three Paradoxes. Another small influence would be local artist Ive Sorocuk's Awesomenesss comics.

I wanted the comic to be a vehicle to express and work through some of the issues in my own life. There is a sense in which the work is an allegory. A little too thinly veiled at times i fear.

So many little things impacted on the comic. things as small as working on cut down a5 paper rather than drawing two pages on an a4, relaxed inhibitions and allowed my to add, subtract and move around pages as i like. I am finding it difficult to resist the urge to redraw the pages with full bleed and replaced text balloons, as i often put them too close to the edge on the A5 sheet.

Hopefully the project will turn out and be finished in time to print, so i can sell it at the zine fair on sunday. I'll post again once i'm further into the project (or finished) wit an update.
Posted by Brendan Halyday at 1:24 AM 1 comment:

Buy my comics & zines from my Etsy Store

Brendan Halyday
I am an illustrator/designer/writer living in Melbourne, Australia. I have been drawing and making comics for as long as i can remember, I started working commercially in design in 1999, in illustration from 2002, illustrating childrens books, educational and chapter books, posters, comics and more for both children and adults, working on original and licensed properties. While primarily working as an illustrator, I do work as a designer on a project by project basis. I specialise in designing for publishing (ie. books and magazines) and advertising.