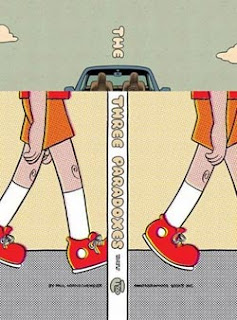 I've been doing quite a bit of reading lately.

It all started with The Three Paradoxes by Paul Hornschemeier, published by Fantagraphics. When i first read Hornschemieier's stuff, i really didn't get him at all. It was a copy of forlorn funnies, number 5 i think which i had picked up at a sale at Alternate Worlds for like five bucks. it seemed kind or surreal and existential. fast forward a couple of years and i've become quite a fan. I dont quite know where or when me opinions of hornschemieir changed, but i have recently read several of his works and found them compelling. it helps of course that his drawing and colouring is exceptional, but it is my maturing that is leading me to view his storytelling in a different way.

It has really coincided with my rapidly diminishing interest in superhero and other mainstream comics for more indie, slice of life and drama comics.

But The Three Paradoxes was just the beginning of my summer reading. Floored by it, i grabbed the next Hornschmeier book off my shelf, Mother Come Home. It was published about 5 years ago and is widely regarded as Hornschmeier's break-out book, and with good cause. A moving story about a father and son as they struggle to cope with the loss of their wife and mother.

The last book of merit i have read is Dash Shaw's Bottomless Belly button, published by Fantagraphics. You could be excused for misaking this book for a brick because, at almost 700 pages, it is indeed a hefty tome. This book proves that decompression can work for indie comics just as well as it works for superhero comics, telling a compelling tale of a family in shock after their parents announced their divorce after 40 years of marriage.

After all this reading, i feel like making some comics of my own...

Posted by Brendan Halyday at 2:38 PM No comments: 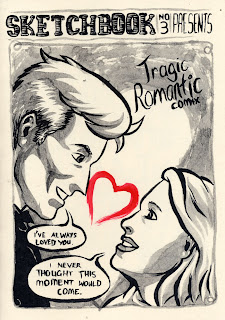 Well, after a lot of hard work and late nights, the latest edition of sketchbook is finished and now available. You can pick it up at sticky or polyester now, and it will be in a few more shops around melbourne (like minotaur, brunswick bound, and others) when i get around to dropping copies into them. Or you can buy it online from brendanhalyday.etsy.com


This is the first sketchbook to include bona fide comic strips as well as illustrations, musings and sketches. I'm pretty happy with it and i am planning to do lots more comics in the next issue. I am also thinking about doing longer comic stories and maybe even serializing stories over several issues.

I had a launch party for this edition just before christmas on Friday 19 December. It was modestly attended, but the group of people that came were really great and it had a really fun, open vibe and everyone seemed to mingle well. The only downside is that a couple of people got lost trying to find the place, so i think next time i will print a map on the invites :P
Posted by Brendan Halyday at 8:22 PM No comments:

Buy my comics & zines from my Etsy Store

Brendan Halyday
I am an illustrator/designer/writer living in Melbourne, Australia. I have been drawing and making comics for as long as i can remember, I started working commercially in design in 1999, in illustration from 2002, illustrating childrens books, educational and chapter books, posters, comics and more for both children and adults, working on original and licensed properties. While primarily working as an illustrator, I do work as a designer on a project by project basis. I specialise in designing for publishing (ie. books and magazines) and advertising.